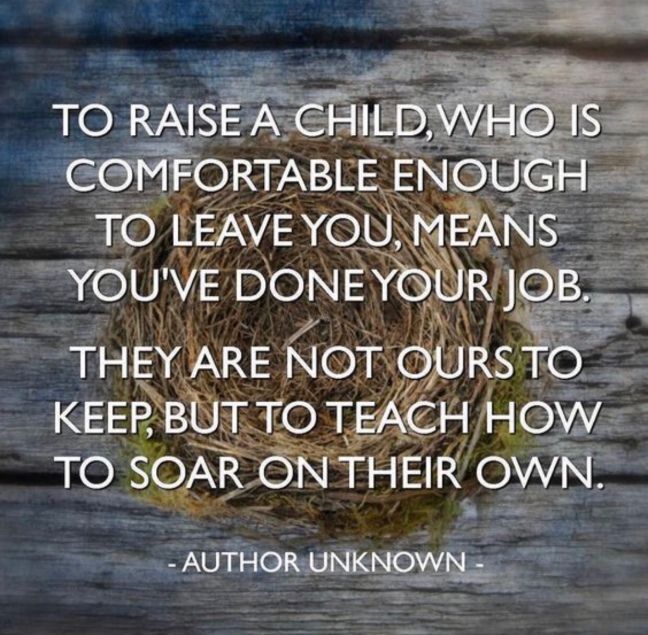 The transition phase from Childhood to teenage and finally adulthood, is more difficult for parents then the child himself. The independence that the child loves, is detested by the parent especially if they have been used to micromanaging and making decisions until then. Sooner or later the child realizes that as interference and moves away farther. This is especially true for Indian parenting where children are considered as a security for old age.

People who do live with that notion have difficult elder years and those who do let go at the right time are happier and live productive lives even at their prime.

Empty nest syndrome is what they call it in psychology. People do want there children to grow and become adults, but once they leave home for universities, higher education or jobs, they become sad and depressed. This is more true for females as right from the time the child is born their lives revolve around raising them.

Only last month my parents came to stay with me. I left my home when i was just 17 to pursue my medical education. I returned for around 3-4 months before I went again to do my postgraduation. I got married during the postgraduation and never went back to be with them but on their advise came back to Delhi ( they considered it near compared to Mumbai) after finishing my studies. Delhi didn’t go well with me, and we shifted to Dubai a couple of years back. I do talk to them on a daily basis and invite them over for a month or so each year. This time, my mom actually expressed sadness over the fact that she didn’t have anyone of the family i.e. either me or my brother for sharing and talking to. She felt it would have been better had we been less educated and stayed close by rather than miles away. My Dad is more chilled out. He didn’t have any such concerns. This all got me thinking would I have similar concerns once my child leaves my nest. Only time will tell. As of now, I am comfortable and do give him the necessary freedom and a requisite watch required for a pre- teen. He is allowed to have night outs with his friends and me and my husband our time without him.

Letting go does not begin the day your child leaves. You have to let go each day as they gain independence. Be it the transition from home to school, teenage years and then finally adulthood.

First of all we have to let go of any expectations. A child as I have said in my previous posts is his own persona and so for each stage we have to set the boundaries. We have to let them be independent so that they make their decisions. Giving them space so that they can make take decisions, make mistakes and learn from them.

Develop hobbies and self care is the key for the parents. Couple time away from the kid even when they are growing is important to prevent alienation of parents when the child is growing up.

A large part of our lives goes in rearing them so as parents the concern is genuine. However, letting go is essential for a healthy mental life of both the parent and the child.

I know it’s easier said than done, but hopefully if we start detachment step by step as they move away it would be worthwhile.

I am participating in A2Z Blogging Challenge this April and this post is my entry for Letter L.

The Saga of a Murmur !

What i wish the Patients knew!

J are the Joys of being a doctor

Best time is always together. #family #familytime
Blessed day ...Start of Navratri and Ramadan ...Gudipadwa, Baisakhi and New year all in one day. Stay Safe and blessed. #RamadanKareem #happynavratri #baisakhi #gudipadwa
You can still make my heart miss a beat @photography.nasa
Some moments of leisure during the busy days. #staycation #staycationuae #rasalkhaimah #beforethesummer #alittlelife
A little of me, A little of you and the memories we make. #memories #weekendvibes #weekendmood
While digging out my junk ..found out my old book ...#Notestoeachother by Hugh Prather and Gayle Parther.